Tournaments, Time-Off and Flying when you're tall !

Now that it's the off-season within the world of beach volleyball, we thought it was time to catch up with our brand ambassador Chris Gregory.

The 2015 World & European Beach Volleyball Tour is now over….so what do we do with our 2 weeks of allocated rest and time-off in the year!?

It may seem a small thing, but one of the biggest reliefs it not boarding another EasyJet, Ryanair, WizzAir, BA, Emirates…practically any airline flight bar Air New Zealand! Lets face it..the airline world isn't designed from 6ft 2 and over…and we just have to suck up the 7hr transit to Dubai with a leg in the isle!

One of the greatest things that happened to me this year regarding travel happened on an EasyJet flight back from Switzerland. I boarded as usual and asked, as usual: ‘Do you have any emergency exit seats left?’

Being 6’10 is obvious why I ask. On this occasion there were plenty of extra leg room seats left. However as you probably know they are around £20 extra. You might think, spend the extra £20 and have done with it. For me, we spend thousands each year on travel, its our biggest outlay. Also, people donate to our cause. Combine the with the principle of the whole thing for me, I refuse to pay, and don't think its right I should have to.

So I went to my previously allocated seat, legs in the isle, and drifted off before taxi..

Next thing I know I’m being woken by a staff member. Another passenger (photo below) who watched the events unfold purchased an extra leg room seat for me. A very kind and genuine gesture from a guy that appreciated the need for some kind of comfort on a long flight home and after competition where I was pretty tired ! 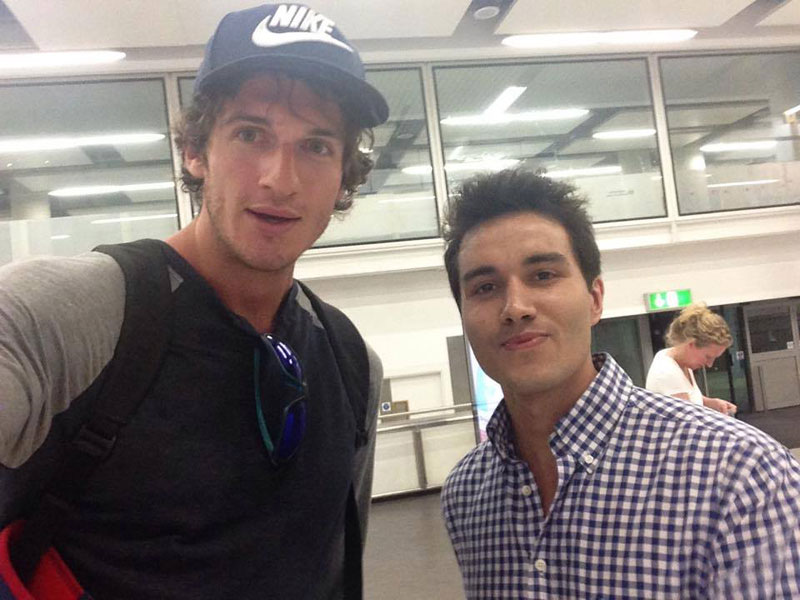 Travelling is draining in itself, and not being able to sit right for hours at a time is an issue when it comes to preparing for an event! So thanks to this man who did one of the kindest most selfless things Ive seen!

Bar the joy of no airports its time to go back to regular work! I visit schools over the UK to talk to young people about sport, the personal journey in performance sport, and why sport its so important! Its a privilege to stand up in front of young people and inspire them during their school years!

I always get questions about what the lifestyle of a performance athlete is really like..Such as: Do you eat healthy all the time?

On the road, travelling from country to country, eating perfectly is a tough challenge, BUT we do a pretty good job. The very simple but effective guidelines we stick to are: Porridge & Fruit in the morning, a well balanced lunch of carbs, protein and some veg, and finish with a no carbohydrate high vegetable/protein dinner…whether you’re a 2tall guy with a massive appetite or not, you’ll be surprised how much healthier you feel, and how easy it is to stay in good shape going with no carbs in the evening! A big ask for some, but I’d really recommend it!

Consistency is key and for the time off at home its the perfect chance to do it well and go into pre-season training feeling fresh and ready!

We landed from Qatar two days ago after 15 events this year and whats felt like a long year. Its a rollercoaster lifestyle for a beach volleyball athlete travelling from venue to venue and battling your way through matches for survival and a living! However, its been a privilege to fly the flag on the circuit, and as a 6ft 10 / 6ft 5 partnership we’ll be going into the 2016 season still one of the biggest teams on tour. Time to get fitter, faster, stronger and aim higher than ever in the new year !