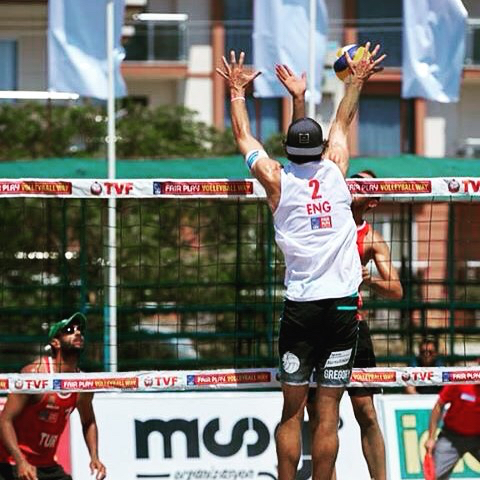 Two months ago, we introduced our first brand ambassador, Team GB Beach Volleyball player Chris Gregory.  Since then, we have been following his progress ithroughout the European Tour, where along with his partner Jake Sheaf (6 foot 5) they have been performing extremely well.

Chris was identified as being ideal for Beach Volleyball as part of Steve Redgrave’s Sporting Giants programme in 2007 ahead of the London Olympics, where they ran recruitment days to identify tall athletes for Team GB sports like rowing, basketball and volleyball.

The second question that usually follows “How tall are you?" is “Do you play basketball?" says Chris. Standing 6 foot 10 it is easy to assume that he plays basketball, a sport dominated by taller guys, but over the last 10 years, things have been changing, to the point that the question might soon become “Do you play Beach Volleyball?”

Chris explained that it has only been in the last 10 years in which the sport has seen a surge of vertically gifted players. This change, all stems back to one player in particular, a 6 foot 9 American called Phil Dalhausser. Teaming up with his 6 foot 2 partner, Todd Rodgers in 2006, they began to dominate the sport with an emphatic run of World Tour medals, also claiming the Olympic gold medal in the 2008 Olympics in Beijing.”

With the men’s net at 2.43m/8ft, Chris explained that the other nations struggled to deal with Phil’s height, especially around the net. “His dominance during 2006 is the main reason for the increase of taller players in the sport today.”

Just like Phil, Chris uses his tall frame to dominate around the net, as well as providing many other advantages. Following the influx of taller individuals to the sports since 2006, the sport now has just as many tall athletes as basketball does, with the advantage of tall players in each sport equal.

Chris said “Every year I see more and more tall guys appear on the tour which is pretty cool to see and also improves the quality and enjoyment of the game, not just from a players perspective but also as a spectator.”

“Because of the fast, dynamic nature of beach volleyball, it is clear that the spectators love it, as during the last 3 Olympic games, Beach Volleyball has had the second highest demand for tickets only sitting behind the men’s 100m final.” It is also currently No.1 in the ticket polls for Rio 2016, so it is a really exciting time to be involved in the sport.”

Chris and Jake are currently in Antalya, Turkey on a weeks training camp with Turkish International teams ahead of the Turkey fIVB World tour stop, where they’ll be battling it out against other physical giants of beach volleyball for a result for Great Britain next week.

They have high hopes for the World and European Beach Volleyball Tours with the optimal goal of reaching the Olympics. We wish them all the best and will be keeping a close eye on their progress throughout.